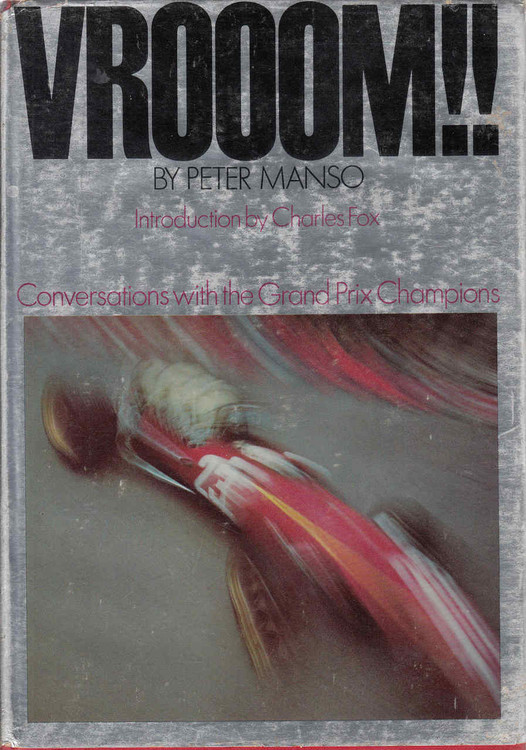 "...the excitement of driving at Spa stems from your just driving on an everyday road. I will always remember the first time I drove Spa. I was sort of putting my front wheels across somebody's doorstep and I thought, Christ, this is really something, you know, going around the corner over somebody's front doorstep...."

Each year the World Driver's Championship is decided on the basis of eleven Grand Prix races in nine months. The competition is fierce, the drivers are dedicated, the rewards are great —and the hazards make racing one of the most dangerous sports in the world. The professional driver lives with the knowledge that an error in judgment, poor road conditions, or a malfunction of the car can cause a sudden dramatic accident, and perhaps death.

In Vr000m!! Peter Manso, long a racing enthusiast, explores the world of the Grand Prix racer in a series of interviews with the drivers themselves (including Joakim Bonnier, Bruce McLaren, Stirling Moss, Jochen Rindt, Pedro Rodriguez, and John Surtees).

They define the fascination of the race,and explain what it is that keeps them driving. The interviews range over a wide variety of subjects, and the drivers' personalities emerge in their candid statements.

JACKY ICKX: "I have nothing bad to say about Ferrari.... But the Italian mentality is completely different. The confusion is permanent.... It is not pleasant, nor easy, to work with Ferrari. When you have to, it is probably better not to understand Italian."

DAN GURNEY: "I feel terrible about [Vietnam]. . who needs friends like us . • . blowing hell out of everything."

JACKIE STEWART: ". . I was trapped in the car fot some thirty-five minutes; the petrol tanks were ruptured so that the monocoque, being like a bath, filled up with thirty-two gallons of petrol. The thing was just rolling around like a tub completely filled, with me lying in it. We couldn't get the electrics switched off because the dashboard had been destroyed. The electric pumps were going, the power was still on, so the fire risk was enormous.... The fumes were occasionally getting me unconscious and then I would come back again.. .. I was getting gasoline burns because gasoline . . . takes your skin off if you're submerged in it for any length of time...."

Black and white photographs by the author and Alan Heald and an introduction by Charles Fox of Car and Driver contribute to the characterizations of these intense, often passionate men.

As Peter Manso points out, "What separates the Grand Prix driver from others is his ability to sustain distractions and crises, and focus his performance, his inward sense that his talent is something real and negotiable.

His is an awareness of perfectibility, a faith that, given the right set-up—the right car, the right weather and tires—he'll go faster, fraction by fraction, and thereby authenticate the potential which is finally his talent...."

MSRP:
Now: $119.95
Was:
By: Bob Gates . After missing the show in his first shoestring attempt at Indianapolis, Vukovich came within an amazing eight laps of winning the following year as a rookie. He then triumphed the...

VW Advertising - The Art of Selling the Air-Cooled Volkswagens

MSRP:
Now: $79.95
Was:
By: Richard Dredge . It was in 1924 that economist Assar Gabrielsson and engineer Gustaf Larson first discussed the idea of setting up a company to manufacture cars. In Sweden at that time only...