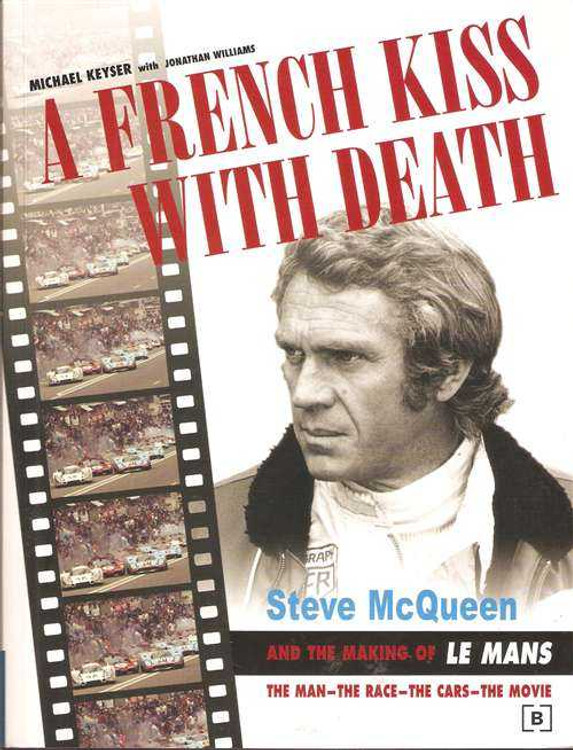 A FRENCH KISS WITH DEATH - Steve McQueen and the Making of Le Mans — The Man, The Race, The Cars, The Movie, examines, in text and photographs, the life of actor Steve McQueen, the many films in which he appeared and his love affair with the the hundreds of cars and motorcycles he owned during his lifetime.

With Jonathan Williams, author Michael Keyser tells, for the first time, the behind-thescenes story of the making of the movie Le Mans — the 1970 meeting of two larger then life legends: the ultimate "King of Cool," actor/driver Steve McQueen, and the ultimate long-distance road race: the 24 Hours of Le Mans. The book details the history of the classic event and the backgrounds of Alfa Romeo, Ferrari, Lola, Matra and Porsche leading up to the 1970 Manufacturers' Championship Series — the year Steve and his crew from Solar Productions arrived in France to film Le Mans. You're there when he hones his driving skills in his Porsche 908 at Willow Springs, Phoenix and Riverside; and at the 1970 Daytona 24 Hours, 12 Hours of Sebring, and 24 Hours of Le Mans.

The majority of the book is devoted to a detailed account of the making of Le Mans — from start to finish, on track and behind the cameras — with insightful and entertaining stories told by Keyser, Williams and some of the key players involved in the six-month production. If you've seen Le Mans, you'll be intrigued by the detailed description of how it was made. If you somehow missed the film, after reading A FRENCH KISS WITH DEATH you'll want to see it.