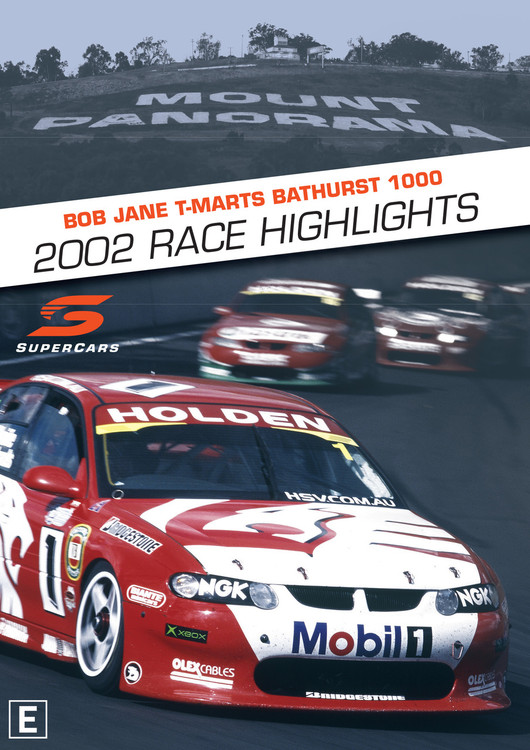 Mark Skaife took his fourth Bathurst win with only a few seconds to spare as he nursed home his Holden Racing Team Commodore, its engine badly overheating. Skaife had taken a superb pole position on Saturday, but he and co-driver Jim Richards did not have an easy ride to victory on Sunday.

At the start they had to fight against the impressively fast OzEmail Ford of Brad Jones/John Bowe, and then against the Kmart Commodore of Greg Murphy/Todd Kelly, the Castrol Commodore of Larry Perkins/Paul Dumbrell and finally the sister Castrol car of Steven Richards/Russell Ingall.

Richards pushed Skaife all the way to the flag, but Skaife kept a cool head while his car overheated and kept his challenger at bay. It was an epic contest held in trying conditions that included rain, hail and shine – the video highlights presentation of the 2002 Bob Jane T-Marts 1000 at Bathurst is one certainly not to be missed.

MSRP:
Now: $39.95
Was:
Bob Jane T-Marts V8 Bathurst 2004 highlights It will forever be remembered as the year of the Kiwi, the kid and the kangaroo. The 2004 Bathurst 1000 was yet another vintage classic littered with...

MSRP:
Now: $39.95
Was:
Bob Jane T-Marts V8 Bathurst 2004 highlights It will forever be remembered as the year of the Kiwi, the kid and the kangaroo. The 2004 Bathurst 1000 was yet another vintage classic littered with...

MSRP:
Now: $39.95
Was:
FAI 1000 Classic Mt Panorama Bathurst 1999 Highlights The V8 Supercars grand finale began with crashes and carnage, built through the emotion of Dick Johnson’s final race, and seemed to have...

MSRP:
Now: $39.95
Was:
The 2006 Supercheap Auto Bathurst 1000 was an event filled with raw emotion as well as sheer exhilaration. It came just a month after the shock death of Bathurst legend Peter Brock, and it ended in...

MSRP:
Now: $39.95
Was:
Supercheap Auto Bathurst 2005 Highlights With heated clashes on and off-track and an unforgettable 11-lap dash to the finish line, the 2005 Super Cheap Auto 1000 will go down in history as one of...

MSRP:
Now: $39.95
Was:
Throughout this video, Ford followers will relive the times of Ford in The Great Race from its first victories at Phillip Island, through the glory years and the heartbreak years – and get to...