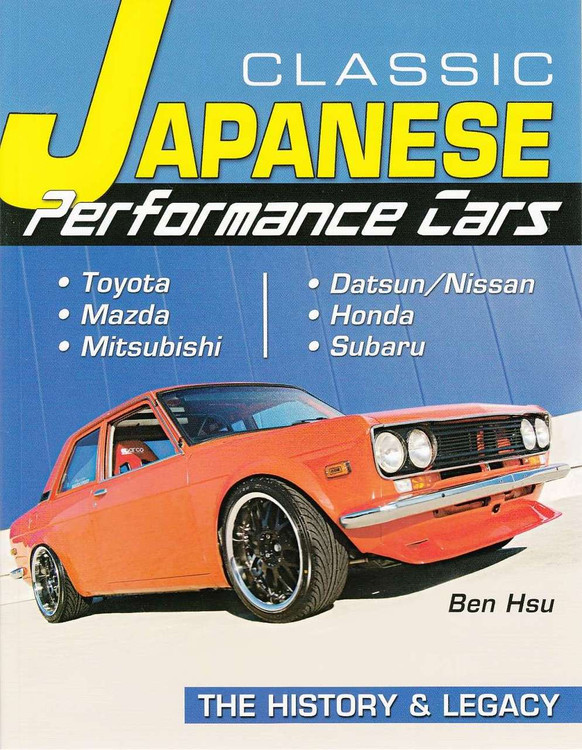 Many of the first cars to be imported from Japan were known for their reliability and economy on the road, but they were also known to be extremely sporty. Older Japanese import cars, such as the Datsun 510 or 240Z, early 1970s Mazda RX2 rotaries, and early Toyota Celicas, are finally garnering attention and respect from enthusiasts as well as serious collectors.

These imports have a rich history of Japanese car culture and motorsports. As the Japanese nostalgic car scene grows, many enthusiasts are curious about the history and traditions of Japanese motoring; curious enough to look into the past and see what other long-forgotten cars served as predecessors to their favorite marques.

There is a growing dedicated fan base among nostalgic enthusiasts who drove these cars thirty or forty years ago. Additionally, these same cars were popular platforms for enthusiasts in Japan and other export markets, creating a worldwide industry ofaftermarket high-performance parts.

This book is the first to address the subject of classic Japanese performance cars, giving credence to both restoration and tasteful customization. Author Ben Hsu shares the production history of the most iconic Japanese classic import models, as well as production numbers, all the different trim levels offered, and which ones are the most sought-after by collectors and enthusiasts. He includes information on Japan-exclusive models and their influence on the engineering of American models. He also discusses their many successes in racing around the world.

MSRP:
Now: $49.95
Was:
By: Brooklands Books . Experts from four continents comment on the second generation of Japan's only real iconic sports car the MX-5. Models covered include 1.6i, 1.8i and Sport, the Turbo and...

MSRP:
Now: $79.95
Was:
By: Autocar Collection . Founded in 1895, Autocar is the world's oldest car magazine. It thrives today like never before as a vibrant, authoritative weekly packed with car news and reviews,...

MSRP:
Now: $195.00
Was:
By: Brian Long . The definitive international history of one of the world’s most successful rally cars. Covers every Lancer model - including all special editions, and Dodge, Colt, Plymouth,...

MSRP:
Now: $99.95
Was:
By: Rod Ker . This is a fascinating guide to Japanese bikes from the 1960s to the early 1990s, concentrating on mainstream, affordable models from the 'big four': Honda, Kawasaki, Suzuki and Yamaha...

How to Paint Your Car -Revised & Updated (Motorbooks Workshop Series)

MSRP:
Now: $350.00
Was:
By: Ron Session . Description Classic Camaro: Repair, Restoration & Upgrades (previously published as Camaro Owner's Handbook) is an essential guide for owners of these first- and...

Classic Motorcycling - A Guide For The 21st Century

MSRP:
Now: $79.95
Was:
By: Rex Bunn . "Classic Motorcycling: A Guide for the 21st Century shows just how much there is still to learn about our favourite pastime. I gained a great deal from it and expect every other...