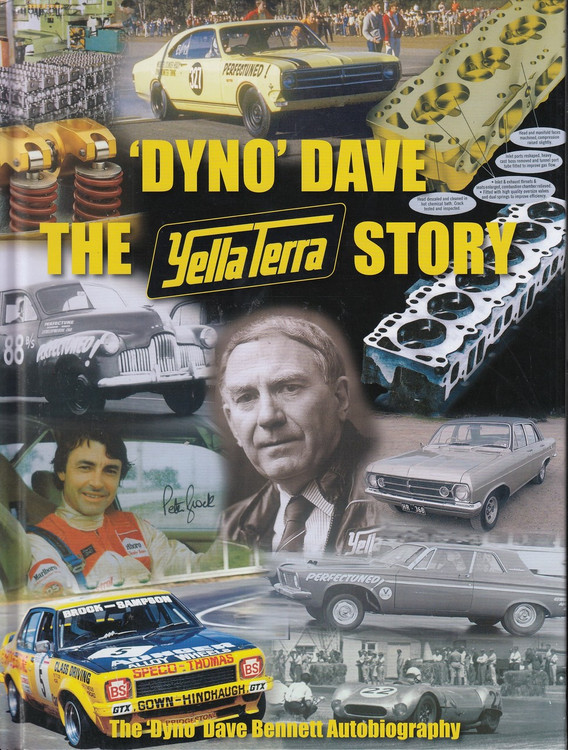 The ‘Dyno’ Dave Bennett autobiography is one of the great success stories of the Australian high performance automotive industry. Fuelled by an innate interest in things mechanical, Dyno Dave was destined to work in an industry based on that interest. Over a lifetime of intense work he established one of the great Australian automotive businesses, Perfectune–Yella Terra. From humble beginnings offering dynamometer based tuning services, the company grew and developed into a giant of the Australian aftermarket and indeed had considerable influence in the OEM market for more than 40 years. Along the way he established the enormously popular and successful Yella Terra brand, supplying exchange high performance Holden six cylinder heads that took the market by storm.

That success led to further high performance engine products such as roller rockers, brand new high performance V8 heads and even extensive CNC based machining for industry. Since the late 1950s, Dave has had an ongoing involvement with ‘big time’ Australian motorsport in many ways. Names from the past, like Murray Carter, Len Lukey, Pete Geoghegan, Norm Beechey, Eddie omas and in more recent times, most signi cantly Peter Brock.
He purchased a new 186 HR HOLDEN Premier sedan in 1967 that he upgraded and called the ’Sprint GT’ with the intention of making an ‘up market’ car with spectacular performance, to be sold through a local Holden Dealer. is car created much media attention. Holden were especially interested in the boosted performance and had discussions with Dave, eventually leading to the development of the famous XU1 Torana. Subsequently the introduction of the Yella Terra heads for Holden 6 and V8 engines, of which some 250,000 were sold.

From a performance perspective, Perfectune’s connections and resulting contract with HOLDEN for cylinder head services, was pivotal in the development of the business. Dave had the foresight to spend money on highly productive capital equipment, developing a small operation into a significant business. Perfectune modified heads were used on seven of Brock’s nine BATHURST 1000 winning cars, not to mention all other competitors and their road going equivalent production vehicles, L34, A9X and SLR 5000. All but a few ‘BROCK’ Commodores, as well as Police ‘Interceptor’ Commodores were fited with Perfectune modified cylinder heads.

In the early days, Dave drag raced many successful cars. He was the first to run a Holden Monaro GTS 327 at Calder Park Drag strip in 1968, one week a er release. is car was undefeated in all but one run in 18 months of competing in Victoria, NSW and Queensland events. He was the rst to win the National Points Championship in 1969, later called ‘Mr Drag Racer’ . He then retired from racing to concentrate on the business. He was in a way ‘an unsung back room supplier’ to a great many racers and car enthusiasts for many years.

‘Dyno’ Dave, The Yella Terra Story is a ‘must read’ for all high performance auto enthusiasts.

MSRP:
Now: NZD59.08
Was:
If you are a fan of a certain era of racing, a Ford fan, or certainly a Dyno Don fan, this book will be a welcome addition to your library. Follow his Hall of Fame career on the match race circuit...

MSRP:
Now: NZD85.88
Was:
By Dave Phillips This book is a rollercoaster ride through the life and times of Land Rover. Fast-paced and entertainingly written, it brings alive all aspects of Land Rover from its humble...

MSRP:
Now: NZD102.05
Was:
By: Harold Bettes and Bill Hancock, 2nd hand book, like new condition. Description Make The Most of Expensive Dyno time Learn how, when and why to use Dyno Get accurate, repeatable and...