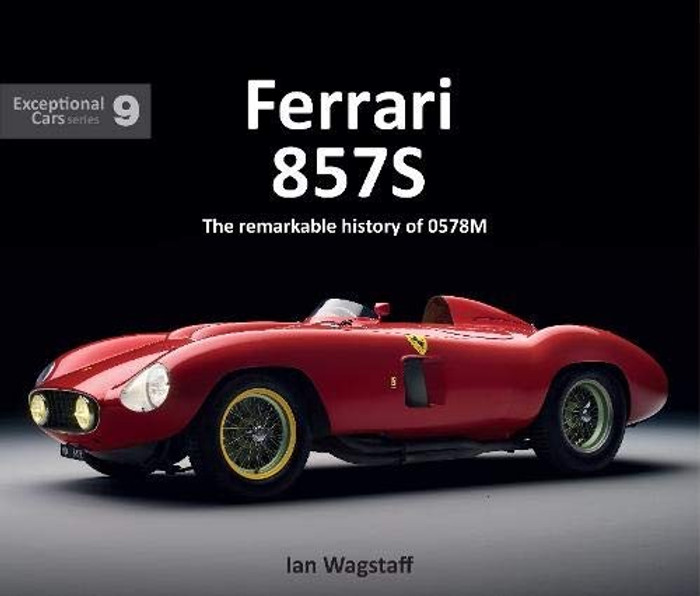 Ferrari 857S chassis number 0578M personifies, if an inanimate object can personify anything, Italian road racing. During its first season the car mainly competed in its natural habitat, travelling abroad once and, while its first race was on the purpose built circuit of Monza, it is on the open roads, blasting through Sicilian villages or up spectator-lined mountains in the Valle d’Aosta region that one pictures this four-cylinder engined, evocatively shaped two seater. Driven by some of the greatest sportscar drivers of the period including Hawthorn, Castellotti, Gendebien, Maglioli, de Portago, Trintignant and Phil Hill, 0578M was rebuilt as part of Ferrari’s attempt to challenge Mercedes-Benz in 1955, competing in the Tourist Trophy and Targa Florio before racing at Buenos Aires and Sebring the following season, finishing second in Argentina.

MSRP:
Now: $99.95
Was:
Author: Richard Heseltine, Published in 2019, hardcover The 250-series was an early Ferrari success story and in 1959 spawned one of the most recognisable sports cars ever built. It is now also...

MSRP:
Now: $129.95
Was:
By Peter Higham The formative years of the 1950s are explored in this next instalment of Evro’s decade-by-decade series covering all Formula 1 cars and teams. When the World Championship was...

MSRP:
Now: $67.50
Was:
There’s an old saying we’ve all heard before that goes “When the top goes down the price goes up.” Of all the projects involved with the restoration of your collector car, few...

MSRP:
Now: $58.95
Was:
Discover the best factory and aftermarket parts combinations for your Chevy small-block engine using this well-researched data that will save you time and energy.In this revised edition of Chevrolet...

MSRP:
Now: $74.95
Was:
Be confident your Chevelle SS is as original as possible! Rarely does a book offer this much hard data in an easy and concise read.Make your Chevelle SS factory correct by identifying what was and...

MSRP:
Now: $59.95
Was:
Rebuild your Volkswagen's air-cooled engine with confidence and get your beloved boxer back on the road.How to Rebuild VW Air-Cooled Engines: 1961-2003 offers beautiful color photos with insightful...

MSRP:
Now: $57.50
Was:
Author Steve Magnante is well known for his encyclopedia-like knowledge of automotive facts. The details he regularly puts forth, both on the pages of national magazines and as a contributing host...

TAKE RISK! The Amazing Story Of The People Who Made Richard Noble’s Extreme Projects Possible On Land, At Sea And In The Air