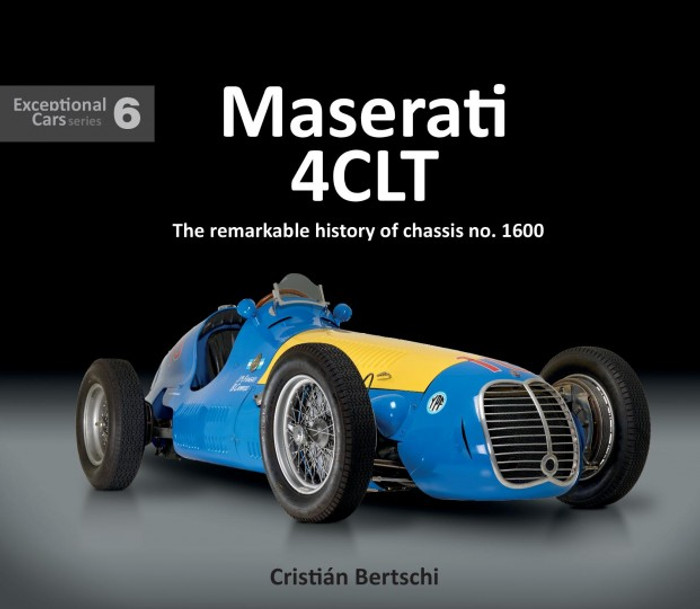 The Maserati 4CLT chassis no.1600 is one of the cars that set the great Juan Manuel Fangio on his way to five World Championships. Fangio won two Grands Prix with it, and it was also driven by other rising stars: José Froilán González, Benedicto Campos and Onofre Marimón. The 4CLT was a stateof-the-art race car in the immediate post-war years. This book describes its development from the 1939 4CL and how Maserati moved from voiturette racing to Formula 1 as the foremost supplier of cars to private teams.

The author Cristián Bertschi trained in industrial design and lectured at the University of Buenos Aires, until 2000, when he discovered that he could turn his passion for cars and motorsport into a full-time job. He has written for publications such as Het Klaverblaadje, Cavallino and Automobilsport. He also runs the INGO database, a platform that tracks the individual history of more than 15,000 cars by their serial numbers.

Key content • Author Cristián Bertschi is a specialist in tracking the history of cars of this era and describes 1600’s exploits race-by-race, including a period after it ceased to be competitive in Grand Prix racing and was fitted with a Ford V8 engine for local events in Argentina. • 4CLT 1600’s subsequent history reads like a detective story: how it was re-discovered, put back to its original specification, restored and rebuilt, and went on a journey from Argentina to the United States and Japan before settling back in Europe, where it is now an established competitor in historic racing. • As well as a detailed chronicle of the car’s highs and lows, the text includes profiles of the men who raced in 1600 and a personal account of driving and running it by a former owner who describes the daunting task of re-creating a Maserati 4CLT engine from scratch. • Profusely illustrated and including many previously unpublished photographs, the book provides not only the remarkable story of an exceptional car but also an insight to the vibrant post-war racing scene in South America.

MSRP:
Now: $99.95
Was:
Author: Richard Heseltine, Published in 2019, hardcover The 250-series was an early Ferrari success story and in 1959 spawned one of the most recognisable sports cars ever built. It is now also...

MSRP:
Now: $59.95
Was:
The first of two volumes covering the legendary Sicilian Targa Florio races that were run between 1955-1964. 51 reports covering the Mercedes, Porsche, Fiat & Ferrari victories, including...

MSRP:
Now: $69.95
Was:
This is the second of two volumes covering the later Mille Miglia years. 51 contemporary reports when Ferrari, Mercedes-Benz and Lancia had memorable wins. With annual results and 6 race summaries by...

MSRP:
Now: $79.95
Was:
This is the sixth Le Mans title in our series & brings the story of these epic races up into the 90s. 38 contemporary race reports from leading British and American journals cover the great...

MSRP:
Now: $59.95
Was:
A Life of Pride - A Story of Adventure from Broken Hill to Cricklewood by Way of Darkest Africa (The Memoirs of Alan G Pride)   Four Wheels - Good! Two Wheels - Better!   Roaring out...

MSRP:
Now: $54.95
Was:
Insights into the organisation, equipment, men, machines, technology and tactics of the RAF's bomber offensive 1939 - 1945 Night and day in the Second World War RAF Bomber Command pounded away at...