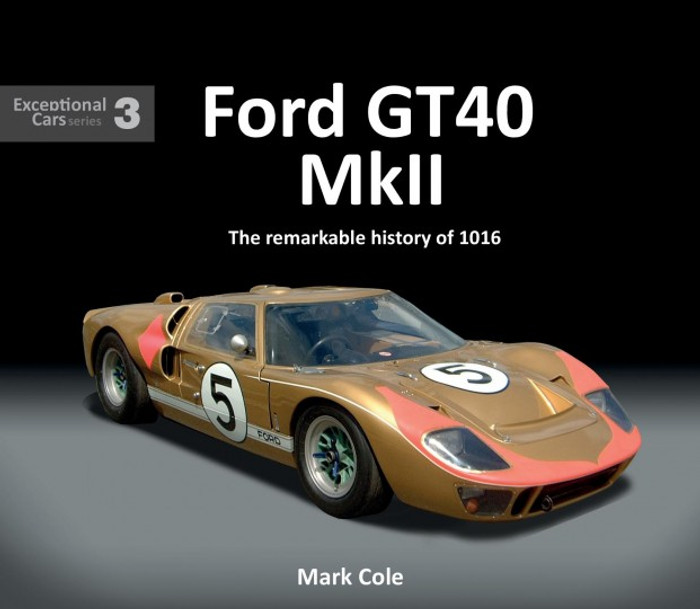 This book tells the story of Ford GT40 Mark II, chassis no. P/1016, one of the trio of cars that crossed the finishing line together at Le Mans in 1966 to score Ford’s first victory in the 24 Hour race. The Mark II was a development of the original Ford GT with a monstrous 7 litre V8 engine. 1016 made its racing debut at Daytona in January 1966 and was entered at Le Mans by Holman & Moody with a distinctive gold and pink colour scheme. Driven by Ronnie Bucknum and Dick Hutcherson, it finished in third place behind the similar cars of Bruce McLaren and Chris Amon and Ken Miles and Denny Hulme.

The author Mark Cole is a journalist and author who covered his 35th Le Mans 24 Hours in 2017. His career includes being club editor of Autosport magazine, press officer at Thruxton and Silverstone circuits, and the press attaché for the FIA World Sports Car Championship. He has, for 25 years, been a commentator on Eurosport TV. The subjects of his previous books are on Brands Hatch racing circuit and GT racing. Key content • The drivers at 1966 Daytona 24 Hours, Ronnie Bucknum and Richie Ginther, had played a big part in the development of the Mark II, the car that gave Ford its first Le Mans win in the third year of trying. • Bucknum also drove the car in the Sebring 12 Hours (with AJ Foyt) and at Le Mans (with Dick Hutcherson). It ran at Daytona the following year driven by Mark Donohue and Peter Revson and at the Le Mans Test Weekend with Bruce McLaren and Mark Donohue driving. • After the Le Mans tests, 1016 was retired from racing and became a star exhibit at the famous Harrah Motor Museum in Reno, Nevada. It is now in the fine collection of Claude Nahum, restored to its specification and appearance as it was at Le Mans 1966. • This book covers the car’s development, its technical details and specification, the role of the Holman & Moody engineering team and biographies of its drivers. It is profusely illustrated with period photographs,documents, and a gallery of studio photographs of the car as it is today.

Ford In Britain - A History Of The Company And The Cars