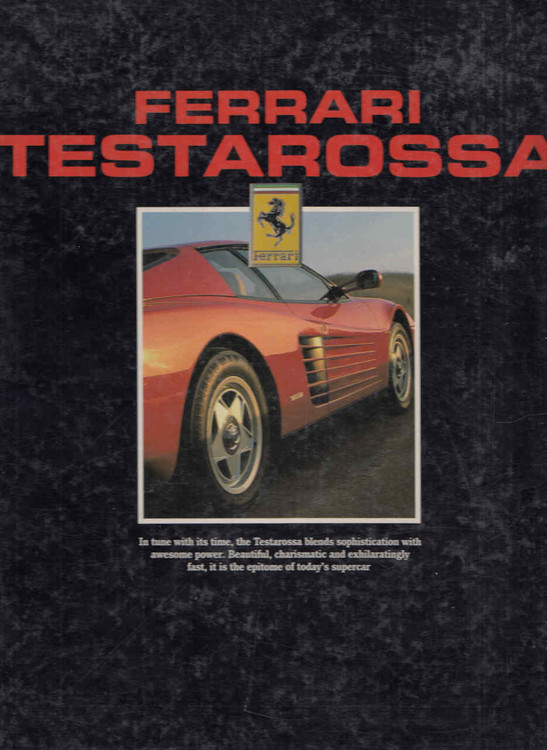 Over the whole spectrum of automotive history, no car manufacturer has drawn more clichés and purple prose than Ferrari. All the products of its forty-one years can be labelled supercars, but some have risen to greater heights than others.

In recent memory, one year — 1984 — stands out as a landmark in Ferrari progress. In the space of a few months, two of the greatest road cars ever to emerge from Maranello were launched to the public.

One was the 'homologation special' GTO, a limited run of 272 cars embracing Grand Prix technology in its lightweight carbon-fibre and Kevlar construction, its 400bhp twin-turbocharged 2.9-litre V8 engine and its formidable cornering power. The other was the Testarossa, a supercar in a quite  different vein with a similarly exotic specification.

Whereas the GTO was a pragmatic production special built in one batch to fulfil the needs of a stillborn racing programme, the Testarossa was Ferrari's supercar flagship for the 1980s, a machine designed to carry the company towards the twenty-first century. It took the already legendary capabilities of the Berlinetta Boxer a stage further in becoming a refined racing car for the road.

Its 5-litre flat-12 engine, derived directly from competition experience, sits behind the two-seat cockpit and delivers 390bhp, enough to push the car to a top speed of 180mph. It has incredible handling, gorgeous Pininfarina styling and a vivid personality. So many wealthy people around the world aspire to owning one that there is an extremely long waiting list.

Ever since the fuel crisis of the early 1970s, the future of supercars has seemed precarious. Several great cars — Maserati, Jensen and de Tomaso — fell by the wayside in those bleak days, but Ferrari shrugged off pessimism about the future by investing heavily in modernising its factory. The company has blossomed through the 1980s, the Testarossa spearheading its progress, to become larger than ever before.

Whether or not the future is bright for supercars, the Ferrari Testarossa will stand as one of the truly outstanding cars of our time. Charismatic, fast, beautiful and . . . not quite perfect . . . it is everything that a supercar should be.

MSRP: $99.95
Now: $81.95
Was:
Although not the fastest or the most powerful Ferrari, the beautiful lines of the Dino have inspired generations of enthusiasts. This book covers the full story of the Dino, from Pininfarina concept...

MSRP:
Now: $189.95
Was:
Every Fascinating Stage Of The Evolution Of The Stunning New Lotus Evora Is Explored In This Fully Comprehensive Book, Lotus Evora - Sublime Supercar. From Its Conception, Through Development,...

MSRP:
Now: $79.95
Was:
By: Karl Ludvigsen . Few people have had the opportunity to visit the Ferrari factory. Now these previously unpublished photos take you behind the scenes of the foundry, machine shops, engine...

Ferrari - Stories from Those Who Lived the Legend

MSRP:
Now: $159.99
Was:
By: John Lamm . Book Description No other cars embody automotive passion better than those produced by Ferrari. From the record-setting Formula One race cars produced by Scuderia Ferrari to the...

MSRP:
Now: $49.95
Was:
2nd hand book in good condition, minor damage to spine, see the last image. Other images are for illustrative purposes only.   By: Lorenzo Ardizio . The history of the legendary Prancing...

MSRP:
Now: $59.95
Was:
By: Rainer W. Schlegelmilch . Description A Ferrari love affair lasts a lifetime: whoever falls under the spell of the prancing horse's power, speed and beauty remains bewitched forever. The purpose...