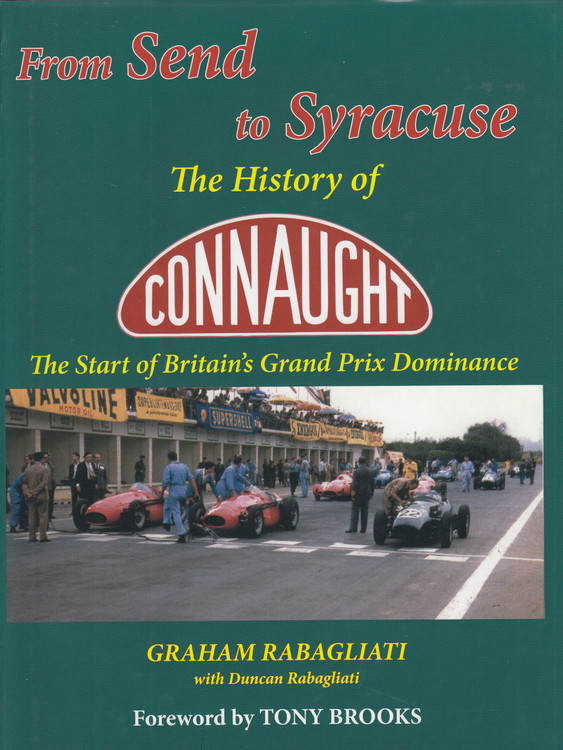 In the mid-1950s racing still took place in time-honoured fashion, when two vintage 1938 converted buses were used to transport the Connaught Grand Prix cars 2,000 miles from Send to Syracuse, and a team of just eight watched Tony Brooks cover 70 laps in the Connaught ‘B’ Type before taking a well-deserved victory against stiff opposition, the first such win for a British car and driver since 1924.

At Syracuse in 1955, Tony Brooks, driving a works Connaught , won a major Continental Formula One Grand Prix for the first time since Sir Henry Segrave won the San Sebastian Grand prix for Sunbeam in 1924, ,defeating the works team of five Maseratis on their home ground, and from that moment on , the face of Formula One was changed, leading to the great domination in the years ahead of the British teams and the British motor racing industry

With the psychological barrier broken, just as in athletics , when Roger Bannister broke the 4 minute mile, the other British marques, Vanwall, BRM, Cooper and Lotus thereafter took a quantum leap forward, and from 1955 onwards, Britain all but never looked back.

MSRP:
Now: $275.00
Was:
By: Kevin Cameron . This is the story of how top-class racing motorcycles have evolved, year by year, from the beginning of the FIM World Championships in 1949 to the present. Each year's...

The Limit - Life and Death on the 1961 Grand Prix Circuit (Michael Cannell, Hardcover)

MSRP:
Now: $195.00
Was:
John S. Allen and Gordon J. Jones Foreword by Jacky Ickx 12 September 2019 This new edition of a classic book tells the story of the celebrated Ford GT40 through a remarkable array of over 850 period...

Ford Y-Block Engines how to Rebuild and Modify