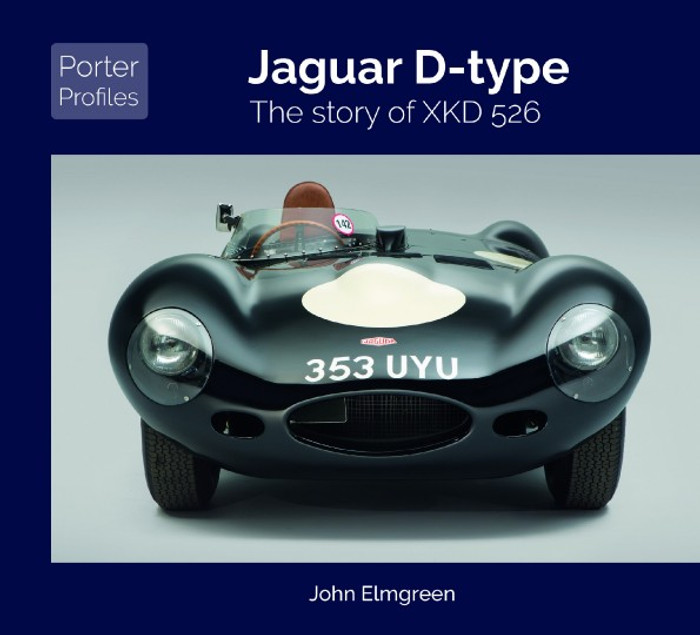 The Jaguar D-type helped to establish the Coventry marque’s place in Le Mans 24 Hours folklore, thanks to three successive victories between 1955 and 1957. With its long, elegantly sculptured bonnet and distinctive tail fin, the D-type quickly became one of the world’s most recognisable sports racers – as well as one of the most successful in period. This book focuses on the fascinating history of XKD 526, one of only three D-types registered new in Australia. While its competition pedigree was forged at some internationally celebrated circuits – Bathurst and Longford, for instance – it also raced at delightfully named bygones such as Gnoo Blas and Catalina Park. This is a comprehensive history of its distinguished track record.

Having been brought into Australia by a Brisbane-based Jaguar dealer with an active interest in motorsport, XKD 526 was campaigned extensively in the country from 1956 until the dawn of the 1970s. Author John Elmgreen chronicles each of its competition appearances, complete with details of drivers, race results and the main opposition.

XKD 526 was used by some of the most notable figures in Australian motorsport, including future racing car builder Frank Matich and expatriate Scot, Doris ‘Geordie’ Anderson. Career profiles of both are included.
Due to a controversial quirk in the regulations, the D-type was converted into a hard-top in 1961 – and Matich raced it in that configuration to win the Australian GT Championship at Warwick Farm.
Of the three D-types that went to Australia as new cars, XKD 526 remained there for the longest period. The book logs its ownership history and full details of all modifications, repairs and restorations.
The car’s evolution is illustrated with a sumptuous array of period photographs from some of Australia’s most comprehensive archives and elsewhere.

MSRP:
Now: CAD175.60
Was:
By: Jeff Daniels . Jaguar, a jewel in the crown of the British motor industry, began life as SS --ars, a coachmaker, and only began -o take engineering seriously in 1935, when it appointed the...

MSRP:
Now: CAD131.73
Was:
By: Brooklands Books . A string of Le Mans victories at the beginning of the 1950s lent an important boost to sales of the XK-engined cars. As a result makers of specialist racing cars created their...

MSRP:
Now: CAD43.91
Was:
like new condition, however top right corner was bent, see the image   By: Barry Collerson,  Every boy's dream is to go motor racing and try to be a world champion - and dreaming is...

A Century of BMW - The Company Since 1916 (Manfred Grunert)

MSRP:
Now: CAD171.25
Was:
Hardcover book, Published in 2019, 567 pages, English text  The BMW Group and its products have been fascinating us for 100 years. Now the comprehensive history appears in simple language...

MSRP:
Now: CAD43.87
Was:
The 47th season of the World Rally Championship started with a bang at Rallye Monte Carlo, but after a back and forth battle through the season Ott Tänak became the first Estonian to take the...

Enzo Ferrari - The Man and the Machine (Brock Yates)

Enzo Ferrari: Power, Politics, and the Making of an Automotive Empire