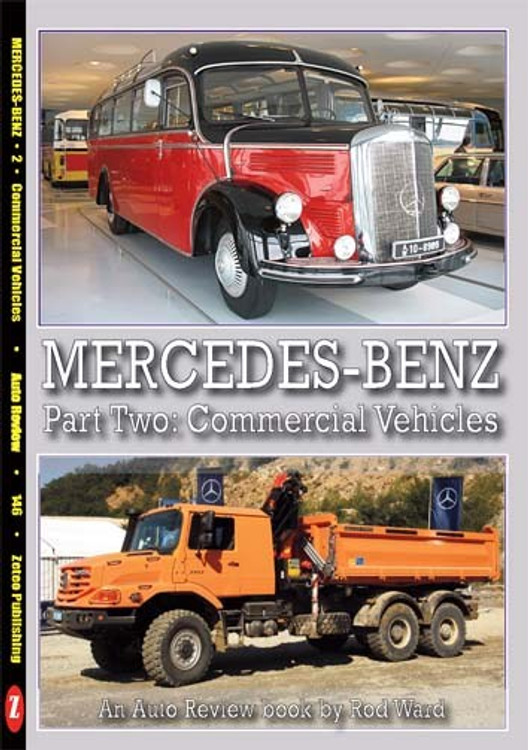 Author: Rod Ward, Published in 2018, paperback, 31 pages, isbn: 9781854821453
When we looked into the question of adding the history of Mercedes-Benz to the Auto Review series, it quickly became apparent that there would be far too much for a single volume.
We therefore decided to divide the story into four, with the first one, Auto Review 143, covering Mercedes-Benz road cars, plus the cars made earlier by Benz and Daimler. This volume, Auto Review 146, covers Mercedes-Benz commercial vehicles, Auto Review 149 is devoted to the Unimog and MB-Trac, and Auto Review 156 will describe Mercedes-Benz competition cars.
This second instalment has to cover a great deal of territory in itself. As well as lorries, buses, vans and pickups, we cover armoured fighting vehicles, off-road vehicles (including G-Class cars) and emergency vehicles. In general we have taken our usual course of setting out most of the story in chronological order, describing each model at its year of introduction, as far as possible. We apologise in advance if your favourite Mercedes-Benz bus, truck or van only gets a passing mention, or none at all; there is a lot of ground to cover here. Mercedes-Benz commercial vehcles are produced in many countries and there can hardly be any part of the modern world where they are not in use. This is a tribute to the founders of the two original companies in the 19th century, Karl Benz and Gottlieb Daimler.
View AllClose

MSRP:
Now: $19.95
Was:
Here we have the story of a firm which built vehicles for over a century. Studebaker was the leading maker of horse-drawn wagons and carriages in 19th century America. Turning to motor vehicles in...

MSRP:
Now: $29.95
Was:
Features • Like having a real marque expert at your side – benefit from the author’s expertise and experience • Advice on choosing the right model and condition • Key...

MSRP:
Now: $29.95
Was:
Features • Benefit from the author’s many years of Triumph experience • Advice on choosing the right model • Key checks - How to spot a good car quickly • Comprehensive...

MSRP:
Now: $29.95
Was:
By Chris Rooke  Features • What to look for when buying a Triumph Trident or BSA Rocket III • Differences between models explained • Written by an experienced Triple...

MSRP:
Now: $19.95
Was:
Author: Rod Ward, Published in 2018, paperback, 31 pages   In the opinion of William Boddy, revered editor of Motor Sport, ‘the Hotchkiss company was one of those manufacturers...