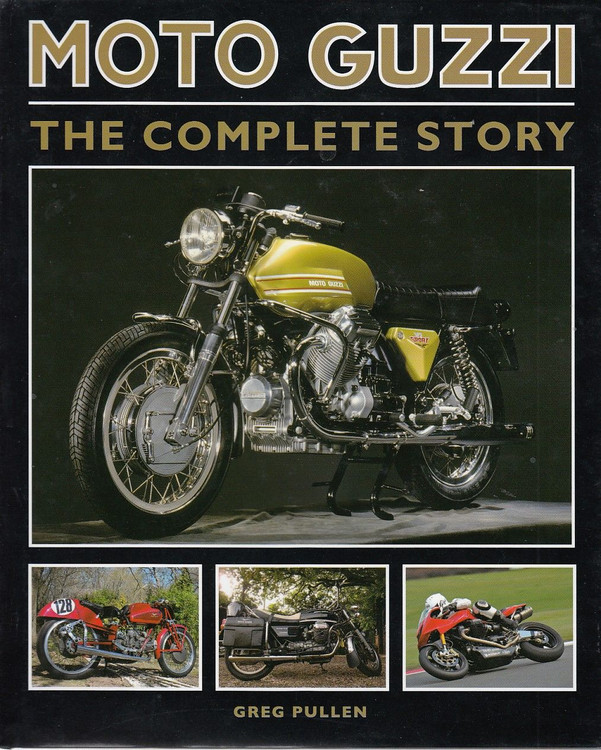 With the launch of the new California 1400 in 2013, and actor Ewan McGregor appointed brand ambassador, Moto Guzzi's owners Piaggio are proving their belief in the future and importance of Moto Guzzi. Moto Guzzi — The Complete Story charts the development of the stylish Guzzi bikes and the highs (and lows) of one of the oldest motorcycles marques still in existence.

Piaggio currently have grand plans for the factory in Mandello del Lario in northern Italy, Moto Guzzi's home since the very beginning and now the oldest motorcycle factory in the world. It was here, on the south-eastern shores of Lake Como, that Carlo Guzzi built his prototype 500 single in 1919 in a blacksmith's forge, and then a factory to manufacture production versions in 1921.

Backed by the Parodi family fortune, Moto Guzzi quickly became Italy's most famous and successful marque. They were the first Italian factory to win at the Isle of Man TT, and in the 1960s the first to realize that the future of motorcycling lay not with cheap commuters but with large-capacity machines for a new breed of enthusiast.

For perhaps the first time, this book provides the definitive account of exactly how Giuliano Cesare Carcano, designer of the 180mph V8 racer in the 1950s, developed the V-twin engine that has become emblematic of Moto Guzzi. Then there are the De Tomas° years and the Argentinian entrepreneur's plans for a six-cylinder Moto Guzzi road bike, eventually dropped in favour of the far more successful and iconic Le Mans.

Finally, the book comes right up to date with the new California and hopes for a new Moto Guzzi single, still based around the factory squeezed between the mountains and Lake Como. Moto Guzzi is uniquely bound to Mandello del Lario and, with few exceptions, every Moto Guzzi ever built has come from here. Moto Guzzi — The Complete Story is the story of that wonderful corner of Italy, some very special motorcycles and the astonishing people who made it happen.

The complete story of Moto Guzzi, from 1921 to the present day, including the background to its development, full production history, comprehensive specification details and hundreds of photographs.

MSRP:
Now: CAD134.37
Was:
By: Ian Falloon, 2nd hand book, book in excellent condition, some damage to the dust jacket - small tear, see the images. Racing and production motorycles from 1921 to the present day. The story of...

MSRP:
Now: CAD152.24
Was:
By: Mario Colombo . Mario Colombo's book can rightly be considered a classic of modern Italian motoring literature, as well as publishing success story. Completely revised, enlarged and updated to...

MSRP:
Now: CAD152.24
Was:
By: Mario Colombo . Mario Colombo's book can rightly be considered a classic of modern Italian motoring literature, as well as publishing success story. Completely revised, enlarged and updated to...

MSRP:
Now: CAD53.70
Was:
By: Brooklands Books . The small family business of Moto Morini first produced single cylinder racers and went on to introduce bikes with a modern revolutionary V-twin from the drawing board of...

MSRP:
Now: CAD80.58
Was:
By: Mick Walker . The Bologna company ’s history goes back to the early 1920s and the MM factory, of which Alfonso Morini was a founding figure. In 1937, Morini struck out on his own and a new...

MSRP:
Now: CAD80.58
Was:
By: Marco Masetti . During the preparation of the "Motociclismo tells..." series, dedicating a 'history' book to a comparative youngster like Aprilia struck some people as rather paradoxical. Aprilia...

MSRP:
Now: CAD134.33
Was:
By: Hazleton Publishing . The last year of the century saw momentous events in motor cycle racing. On the track, dominant five times 500cc champion Mick Doohan was eliminated in an early crash. And...

MSRP:
Now: CAD94.06
Was:
By: Hazleton Publishing . Motor cycle racing has never been better than it was in 2003. It has also seldom been worse, serial tragedy underscoring a year of true drama. The Grand Prix series enjoyed...