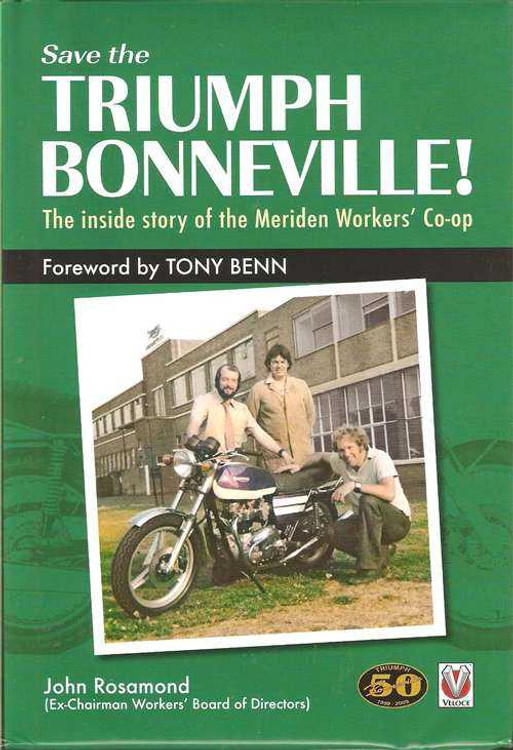 There is no more famous motorcycle than the Triumph Bonneville, the Bonnie, "the best motorcycle in the world," and the Meriden factory producing this icon was a personal Mecca to fans of the marque. Film stars such as Steve McQueen visited Meriden for their Triumphs. But on the brink of what should have been its biggest ever sales season, the BSA parent company dramatically collapsed. The Conservative government reacted, and Norton-Villiers-Triumph was created. The new owners decided to close down Meriden ... so the workers locked them out.

There followed protracted political negotiations, affected all the while by national government changes, ministers’ attitudes, national and international economic conditions and, throughout all this, the world's continuing desire for the Triumph.

As much a study of changing sociopolitical attitudes as of an economically traumatic time for both Triumph and the country, socialist John Rosamond's unique position within the workers’ co-operative makes this work a fascinating account of a story never before told from the inside. The reversal of his role from worker to chairman brought with it new responsibilities, bringing home to him the passion that employees, customers and dealers had for Triumph, and how that could keep Meriden from closing and the Bonneville in production. During all these desperate struggles, the Triumph Bonneville became the best-selling motorcycle of its class, winning the coveted Motor Cycle News Motorcycle of The Year award at the end of the seventies. Yet within just a few years of this, Meriden and the Bonnie were finally gone.

All the rescue attempts, the lifesaving international orders, and the negotiations for a reprieve with the new Thatcher government are covered here in unique detail, as is the introduction of new models that Meriden hoped would attract a 'white knight'.

Lavishly illustrated with never-before-seen photographs from the personal collections of the factory's workers, this inside-story of Triumph's last years at Meriden is the definitive history of the most famous of the Tony Benn worker's co-operatives.

MSRP:
Now: $129.95
Was:
By: James Mann, Mick Duckworth . Description This sumptuous book is a celebration of Britain's most famous motorcycle — the Triumph Bonneville. Launched for 1959, the legendary Bonneville was...

MSRP:
Now: $150.00
Was:
By: Claudio e Fabrizio Porrozzi . This is a photographic record of the 2004 Superbike World Championship. Full of all the statistics from the season. The complete guide to the 2004 season.  ...

Sauber - Mercedes C9 - The Return of the Silver Arrows

MSRP:
Now: $595.00
Was:
By: Ian Bamsey . Mercedes re-entered international motor racing in 1988 with the fabulous, fully enclosed, turbocharged Sauber C9 sports-prototype, which over two seasons became the dominant force in...