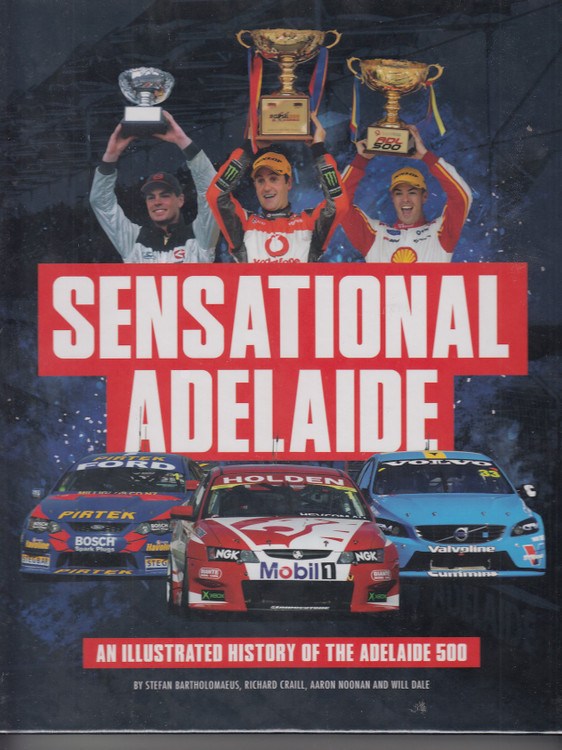 THE Adelaide 500 is the only event to sit in the Supercars Hall of Fame and, for the first time, the complete history of this world-class motorsport event is being celebrated in a limited edition, hardcover collector’s book.

Produced by the V8 Sleuth team behind a range of other successful motorsport publications, the book, ‘Sensational Adelaide: The Illustrated History of the Adelaide 500’, is a 400 page look back at one of the biggest touring car races the world has ever seen.

From 1999 to 2020 the event attracted thousands of fans to the parklands street circuit, turning on some of the best racing and biggest events on the annual motorsport calendar.

2016 Adelaide 500 winner and proud South Australian Nick Percat has penned the foreword for the book, documenting his passion for racing and how he went from a fan hanging off the fence watching his Supercar heroes’ race to lining up on the grid and beating them to win the event in just his third full season in the category.

First held in 1999, the Adelaide 500 became a jewel in the crown of Supercars racing and has won numerous awards over the course of the years, all while playing host to the biggest domestic stars of the V8 category.

Lowndes won the first Adelaide 500 in 1999 and McLaughlin won the last held in 2020 before the State Government elected to kill off the event and discontinue it for 2021.

This publication is a must-have for fans of the Adelaide 500 or Supercars and motorsport in general and provides a look back at a wildly popular event that fans far and wide have raved about for years.

MSRP:
Now: $39.95
Was:
Golden classics from Adelaide International Raceway  SOUTH Australia has an amazing history within the annals of Australian motorsport and on this release we celebrate some of the great races...

MSRP:
Now: $89.95
Was:
Holden has been a major part of Australian motorsport history and, in this special edition hardcover 400-page release from the V8 Sleuth team, we celebrate and honour the brand’s history in...

MSRP:
Now: $19.95
Was:
Paperback by Rod Ward The Ford Thunderbird was originally conceived as a two-seater sports car, launched in 1955 to compete with the Chevrolet Corvette, but the Ford hierarchy was not thrilled by...

MSRP:
Now: $95.00
Was:
Hardcover, published in 2021, Includes new Z Proto story Nissan Z: 50 Years of Exhilarating Performance is the Nissan-official chronicle of Z history, from Datsun's planning for the new model in the...

MSRP:
Now: $59.00
Was:
Paperback, published in 2008, 110 pages Covers The Story Of The Tough, Popular El Camino From Under The Hood To Inside And Outside Options, All Of Which Are Shown In Full Colour.

MSRP:
Now: $19.95
Was:
Author: Rod Ward, Softbound, 31 Pages, ISBN: 9781854821716 Mitsubishi is an important name in heavy engineering, its heritage of shipbuilding, railways and aviation encompassing products from the...