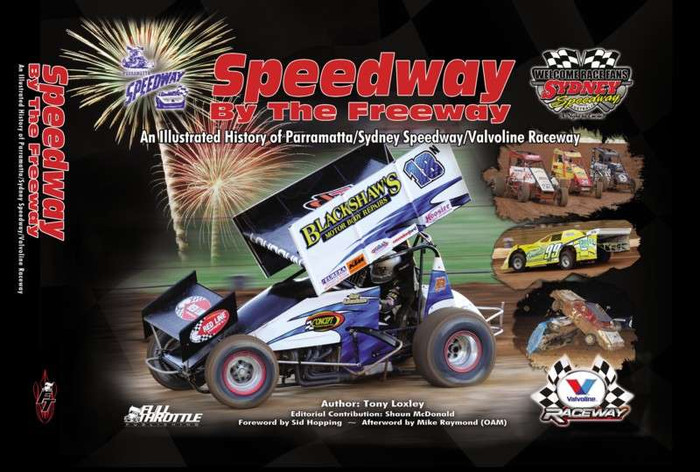 "Speedway by the Freeway - An Illustrated History of Parramatta / Sydney / Valvoline Raceway" is a 472 page, hard cover book covering the history of Sydney's iconic Parramatta Speedway - now named Valvoline Raceway - from its inception in 1977 until this current season.

The tome has over 1500 images from the days when the track was bulldozed into shape, the opening meeting, and right up until this season's action (2013-14).

The book has been produced/authored by Tony Loxley of Full Throttle Publishing, with editorial contributions from Shaun McDonald. The Foreword is from Sid Hopping and the Afterword by current Track Manager, Mike Raymond (OAM).

The book has editorial coverage of every season run from 1977, and individual essays from those who have been insrtumental in ensuring this race track has survived, and flourished since '77. Writers such as Dennis Newlyn, and Alan "Olly" Edworthy have contributed, and former promoter David Lander has scribed a wonderful story on his years promoting the track. Stuart Telfer, Lance Wilson, Wade Aunger and others have also given their impressions of the track, and the imagery is nothing short of incredible.

Photographers such as Wayne and Bill Meyer, Tony Loxley, Gavin Skene, Gary Ried, Joanne Richards, John Morris (Mpix), Lauren King and many more, have provided photos that in many cases, are simply breathtaking!

This is, quite simply, one of the finest racing books ever produced on an Australian - if not the world's - oval track venues.

MSRP: $74.95
Now: $39.95
Was:
By: Tony Loxley . Speedway racing has been conducted in Australia for over 100 years, beginning with primitive motorcycle races on roughly laid out oval tracks, or established horse racing and...

MSRP:
Now: $295.00
Was:
Limited, numbered edition, sigened by Tony Loxley . The world of oval track speedway racing in Australia has been in existence for around 100 years but up until now, no publication had ever...