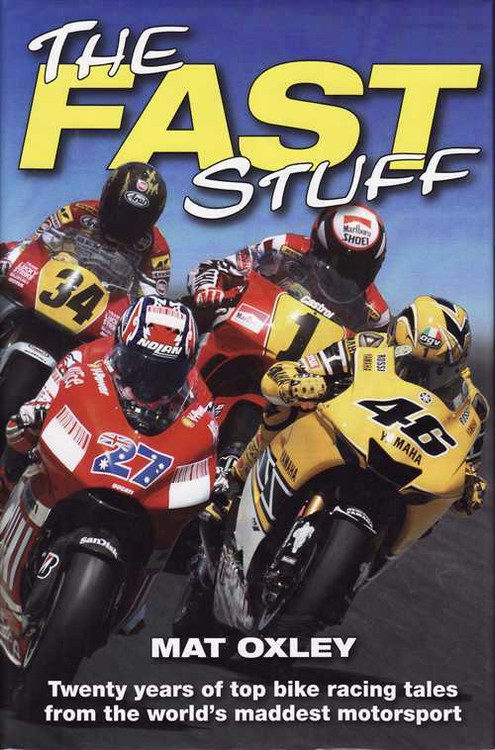 Mat Oxley has been working the Grand Prix scene since the late 1980s. Often irreverent, occasionally hilarious, he is MotoGP's gonzo journo, always shooting from the hip, always offering a unique perspective on the world's maddest motorsport.

This book brings together two decades of his best writing from Bike, Performance Bikes, MCN, Roadracing World, Classic Bike, AMCN and other magazines worldwide. The Fast Stuff gets to the heart of one of the world's toughest sports with fascinating stories that reveal the evil dirty tricks used by top racers, the riding techniques of GP racing's rich and famous and the race-winning psychology of 'flow'. The Fast Stuff is also packed with interviews with the fastest, maddest, baddest racers, from hard-drinkin' old-timers like Graeme Crosby and Gary Nixon through to today's super-pros such as Valentino Rossi, Casey Stoner, Nicky Hayden and John Hopkins.

Mat Oxley raced bikes from 1979 to 1990, winning the Isle of Man 250 production TT in 1985 and taking lap records on the Island, and at Brands Hatch, Donington Park and Snetterton. He was third in the 1986 endurance world championship and finished second in the 1984 Le Mans 24 hours and the 1990 Spa-Francorchamps 24 hours. He has written several books, including acclaimed biographies of Valentino Rossi and Mick Doohan. Over the past two decades he has interviewed every racer that mattered and ridden every race bike that mattered. In 2001 he was nominated for a Royal Television Society award for his commentary work on Channel 5's MotoGP programme.

Fast Lady - My Life In Motorsport

MSRP:
Now: $79.95
Was:
By: Joy Rainey . Here is the inspirational life story of a woman who has proved that size doesn't matter in the world of motorsport. Joy Rainey, a person of restricted growth, was weaned on the...

Boy's Own Stuff! Early Days at Silverstone and Snetterton

MSRP:
Now: $99.95
Was:
By: Jim Loveridge . This book came about because the Publisher wanted his Father to capitalise upon a talent for writing that had been under-utilised by a 40 plus year career in The Law! Aside from...

The First Beetle Resurrecting a 1938 Prototype

The Ford Model A - As Henry Built It - A Color, Upholstery and Production Facts Book

MSRP:
Now: $89.99
Was:
By: Daniel Peirce . Description The story of the Up-N-Smoke Engine Project journals how what started as an artistic outlet became an obsession and eventually a business. This is the project that...

MSRP:
Now: $149.99
Was:
By: Matt Stone, Luca Dal Monte . An Unconventional View of The World's Most Charismatic Cars For more than six decades no other name has inspired as much passion and excitement among car...