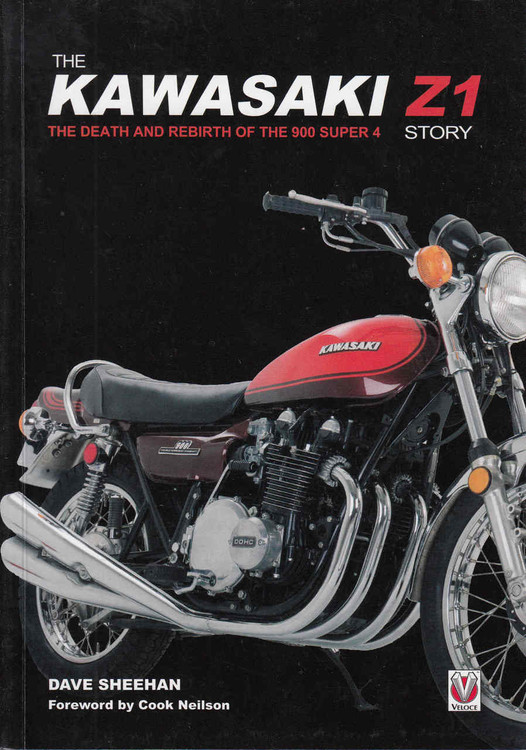 The Kawasaki Z1 Story tells how the smallest of Japan’s Big Four motorcycle manufacturers nearly beat the world’s biggest to become the first to the market with a Four, and how Honda’s CB750 debut almost spelled the end for the Z-1 … before Kawasaki stunned everybody with something bigger, faster, and better!

Just as Kawasaki was about to green-light the world’s first mass-produced across-the-frame four-cylinder motorcycle, Honda pulled the rug out from under them, unveiling the CB750-4 at the Tokyo Show in 1968. It lit the fuse for what was to become motorcycling’s most explosive decade.
In never before published interviews, with the men responsible for the bike code-named ‘New York Steak,’ Dave Sheehan relates the story behind the Z1’s development; the secret US testing programme in which a team including Imola-race winner Paul Smart rode pre-production bikes disguised as Hondas coast-to-coast across America.

The Kawasaki Z1 Story examines the myth, truth and legend surrounding the Z1’s first race win – of which even Kawasaki knew nothing. Here, too, is the full story of the epic three days at Florida’s legendary Daytona Speedway when a trio of Z1s broke more than 50 speed endurance records.

MSRP:
Now: $89.95
Was:
By: Lance Cole . LAUNCHED in the late 1960s, the Saab 99 a highly distinctive car from a highly individual manufacturer. Designed as a medium-sized, and medium-priced, family car building on the...

MSRP:
Now: $125.00
Was:
By: Tony Sculpher . Description Produced between 1972 and 1980. the high-performance, street-based Kawasaki motorcydes enhanced the modem superbike standard created by the 1968 Honda CB750. This was...

MSRP:
Now: $175.00
Was:
By: Iain Ayre . A rising number of enthusiasts are attracted by the prospect of driving a tailor-made car that they have built themselves, and the vast range of designs available ensures that there...