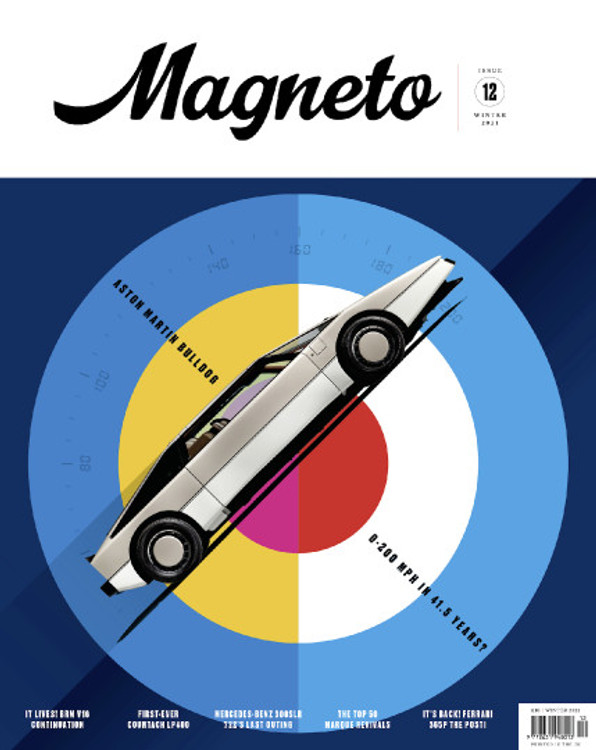 The return of Aston Martin Bulldog

The full story on how cash-strapped Aston Martin aimed to create the world’s fastest supercar and, against all odds, achieved over 190mph in the prototype before the plug was pulled on the project. Our feature explains what happened to the car over the following years before finally being rescued and now restored by CMC. It’s written by Simon de Burton, author of the forthcoming definitive book on Bulldog, with exclusive studio photography by Rick Guest and restoration shots by Amy Shore.

How the first of three planned V16 Continuations has been created from original archive drawings by Hall & Hall for John Owen – son of Sir Alfred Owen, whose Rubery Owen company rescued and financed the BRM team from the 1950s onwards. Editor David Lillywhite and photographer Sam Chick have followed its progress over the past two years.

Leading motor racing historian Doug Nye tells the parallel stories of his friends and colleagues Brooks and Hamilton, who both died recently within a day of each other. With eye-watering anecdotes and behind-the-scenes tales, this is as much a story of how the pair were responsible for the growth of the global collector car market as it is personal obituaries.

One of the four Pebble Beach Best of Show contenders (and one of only two post-war models) in 2021, the prototype three-seater is one of just two made – and this one is fresh from restoration by the renowned Paul Russell and Company. Photographed by Evan Klein, written by Massimo Dèlbo.

Ludvigsen on… the Bugatti straight-eight

The greatest returns of famous – and not so famous – marque names over the years, by Richard Heseltine.

John Simister unravels the many models of the original A110 and explains which is best, how to find a good one and whether or not competition modifications make a difference.

MSRP:
Now: $100.00
Was:
Taking a fresh approach, this book delivers an up-to-date review by investigating the essential characteristics, design and driving experience that defines the Porsche legend and its cars. From icons...

MSRP:
Now: $19.95
Was:
One and three-quarter million Chevrolet Corvettes have been produced over eight decades, all two-door, two-seat sports cars, and in eight distinct generations. The generations are usually abbreviated...

MSRP:
Now: $19.95
Was:
Many fine cars have been made in Belgium. Abundant raw materials, technical expertise and capital supplied a car industry which flourished from the late 19th century until 1914, and again from 1919...

MSRP:
Now: $180.00
Was:
From 1980 to 2000, Camel Trophy took more than 500 amateur competitors from 35 countries on extraordinary and challenging adventures. On most of these events, teams drove specially prepared Land...

MSRP:
Now: $110.00
Was:
With well over 250 photographs, many in colour by distinguished photographer Simon Clay, this book celebrates the style and flair of a bygone era, and provides a vital fund of information for the...

MSRP:
Now: $130.00
Was:
When OO7 first took control of the DB5 in Goldfinger it redefined the action movie forever, setting a standard for everything that came afterwards. Over the decades that have followed, Bond's...

MSRP:
Now: $150.00
Was:
From a simple sketch of a box-shaped delivery vehicle to one of the most recognisable silhouettes in motoring, the first-generation VW Transporter formed the genesis of what was to become the...