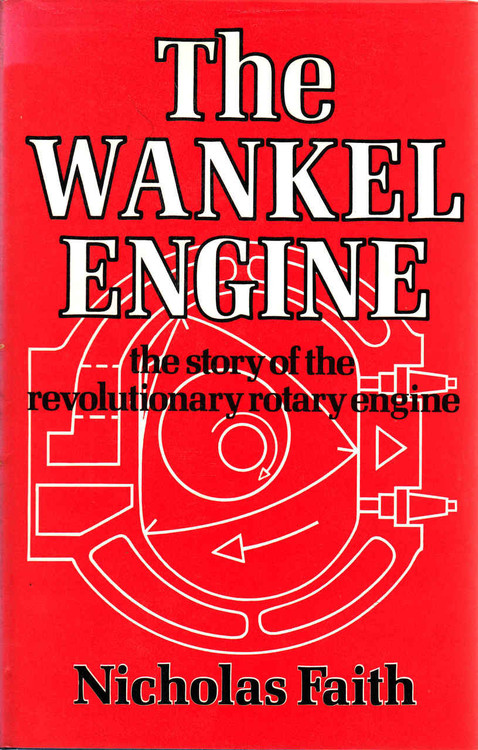 The Wankel rotary engine—named for its inventor, Dr Felix Wankel—is the single most revolutionary new idea in motoring since the piston engine was developed. As Nicholas Faith writes, 'had the rotary engine been developed seventy years before the piston engine we now use, and not seventy years after, anyone selling the idea of the heavy, noisy, complex reciprocating engine, using fuel far more refined than that required by a rotary, would have been laughed out of court.

Nicholas Faith traces how Wankel first solved many of the problems of the rotary engine—which in theory is much more efficient than the piston engine—under contract for the Luftwaffe; how the first key developments were undertaken by a small German motor-cycle company, NSU ; how the idea was spread world-wide by an American showman-businessman, Roy Hurley; how a quiet Japanese engineer first produced a working commercial model of the engine; how the idea is used for everything from model (and full-sized) aeroplanes to outboard motors, and how the giant General Motors gave its seal of approval to the idea four years ago.

The book is partly a story of technical advances. Much more, it is the intricate and fascinating story of the human and business factors which affect a major invention. It involves, on the one hand, big, modern corporations—each with its own mystique, its own internal conflicts—while, on the other, it brings in innumerable wheeler-dealers, bankers, entrepreneurs, middlemen, characters who sometimes seem to have strayed from the more casual, more personal days of nineteenth century capitalism.

And yet, now, over twenty years after Dr Wankel first worked out the exact figuration of his engine—a design of great elegance, both to the qualified engineer and to the layman—only two manufacturers actually make the engine and the motor industry is still not converted to its virtues.

MSRP:
Now: NZD99.38
Was:
By: John B. Hege . Conceived in the 1930s, simplified and successfully tested in the 1950s, the darling of the automotive industry in the early 1970s, then all but abandoned before resuming for a...

MSRP:
Now: NZD325.92
Was:
By: Karl Ludvigsen . The V12 Engine gives an unprecedented and in-depth overview of all the V12-powered cars ever made and the magnificent engines that powered them.  Its author claims to cover...

MSRP:
Now: NZD99.42
Was:
By: Daniel Peirce . Description The story of the Up-N-Smoke Engine Project journals how what started as an artistic outlet became an obsession and eventually a business. This is the project that...

MSRP:
Now: NZD66.23
Was:
Author: Ryan Lee Price, ISBN: 075478014217 Few would argue that no other car has captured the imagination of the world quite like the Volkswagen Beetle. Originally conceived as "the People's Car,"...

MSRP:
Now: NZD99.38
Was:
By: John B. Hege . Conceived in the 1930s, simplified and successfully tested in the 1950s, the darling of the automotive industry in the early 1970s, then all but abandoned before resuming for a...

MSRP:
Now: NZD276.20
Was:
By: Graham Rood . The Tiger played an important part in the history of the Rootes Competition Department and the close-knit team of drivers, navigators, mechanics, engineers and the team managers...

MSRP:
Now: NZD552.40
Was:
A Limited Edition of 200 Copies, Copy no 16, published in 1977 2nd hand book in a very good condition, some stains, see images. PREFACE To perpetuate sane of the early history Of the Vintage...

MSRP:
Now: NZD85.62
Was:
This incredibly detailed book is the third volume of the author John Giles' Great War trilogy. This tome, using the "Then and Now" formula covers all the other major battles fought on the Western...

MSRP:
Now: NZD110.42
Was:
By: David Tremayne . The concept seemed preposterous: take two engines from the humble JCB digger, beloved of young kids and construction companies the world over, and use them to challenge the 235...