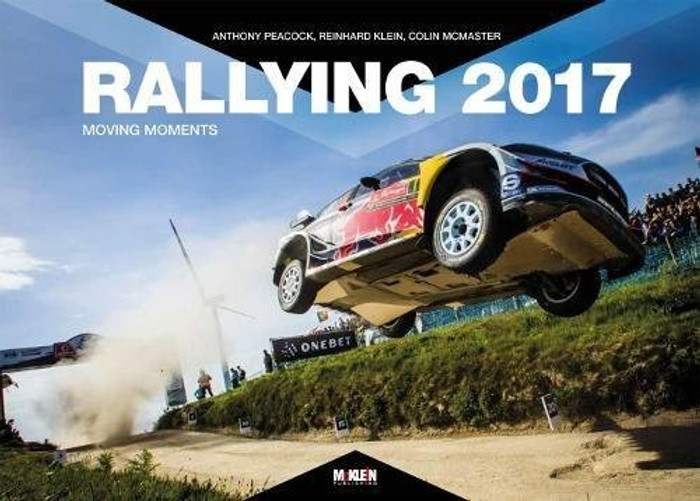 The 2017 World Rally Championship season has been one of the most stunning and entertaining in the history of the sport. It featured spectacular new cars and a new generation of drivers that came of age during the season. All around the globe, there were intense battles for glory with seven different drivers and all four WRC manufacturers - Citroën, Hyundai, M-Sport-Ford and Toyota - spraying winner’s champagne on the podium. The old champion, Sébastien Ogier, never had to face quite such fierce competition in the past but rose to the occasion and became World Champion for the fifth time in succession.

All the action and drama throughout the year was captured by McKlein who picked this thrilling season to create their first yearbook after a ten-year break. With 280 pages, “2017 Rallying - Moving Moments” features all thirteen WRC rounds from the perspective of the renowned rally photographers with short summaries of the events, photos of all the leading cars and full final results. Furthermore, it carries a review of the 2017 European Rally Championship (ERC) season and tells of other ‘Moving Moments’ such as the Colin McRae Tribute at Rallylegend and the re-birth of Toyota’s Group S prototype at the Eifel Rallye Festival.

MSRP:
Now: $139.95
Was:
Author: Anthony Peacock, Reinhard Klein, Colin McMaster, Hardcover, Published in 2018, The World Rally Championship (WRC) just gets better and better. 2018 will long be remembered as a gripping...

Rambler Canada - The Little Company That Could (signed by the author)

MSRP:
Now: $139.95
Was:
By: James C Mays . Buckle up for a breakneck - speed joyrice through the rich history of the boldest and toughest of the independent automakers. Meticulously researchec, this is one manufacturing...

MSRP:
Now: $45.00
Was:
By: Range Rover Factory . Range Rover Owner's Handbook - This manual is divided into ten main sections. All pages carry the appropriate section number in the top outer corner to facilitate...

Rallymaster - The secrets of rally driving by the Flying Finns DVD

Rally Navigation - Develop Winning Skills With Advice From The Experts

MSRP:
Now: $99.95
Was:
By: Martin Holmes . Description   Compiled by a leading international rally journalist and photographer, this is a collection of interviews with experts covering every aspect of...