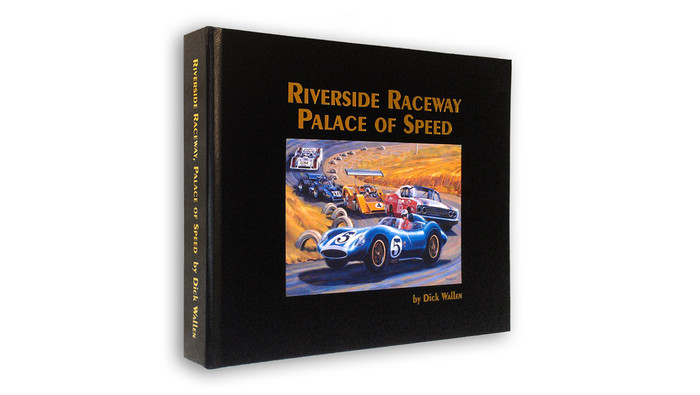 Riverside Raceway: Palace of Speed revives great memories of the extraordinary and demanding southern California championship road course that sadly closed in 1989 to make way for a shopping mall. Dick Wallen covers everything from the construction of the track in 1957, through the late fifties and early sixties sports car racing, NASCAR stock car racing, National Championship Indy car events and International contests such as the United States Grand Prix and the Los Angeles Times Grand Prix.

Legendary drivers such as sports car racing’s Phil Hill, Jimmy Clark and Mark Donohue, NASCAR’s Junior Johnson, Richard Petty, and Dale Earnhardt, Indy Car racing’s Parnelli Jones, Mario Andretti, A. J. Foyt and Rick Mears, to off-road racing’s Mickey Thompson, Walker Evans and Roger Mears are all covered in this wide-ranging volume. Not forgotten are several seasons of drag races, most of them over a half-mile strip instead of the conventional quarter-mile. It contains 352 pages with over a thousand photographs.

MSRP:
Now: $150.00
Was:
Distant Thunder: When Midgets Were Mighty, presents a thorough history of the birth and flowering of the California midget car racing craze from 1914 to 1950. Nearly 400 pages long, it is crammed...

MSRP:
Now: $230.00
Was:
As Dick Wallen writes in his introduction to this extraordinary book, "This is a celebration of the American board speedways and the Golden Age of oval track competition for which they were largely...

MSRP:
Now: $200.00
Was:
Chronicles of the formative years of America’s post-war National Championship, when very brave and very tough young men vied for victory at Indianapolis and a host of dirt ovals, with little more...

MSRP:
Now: $200.00
Was:
Chronicles of the formative years of America’s post-war National Championship, when very brave and very tough young men vied for victory at Indianapolis and a host of dirt ovals, with little...

MSRP:
Now: $170.00
Was:
Award-winning author and automotive historian Joel E. Finn, renowned for his expertise on American Road Racing, has provided the first published in-depth analysis of the country’s largest...

Bridgehampton Racing: From the Streets to the Bridge (Joel E. Finn)

MSRP:
Now: $250.00
Was:
The life of America’s most popular race driver is the focus of two decades of American Auto Racing and American life in the Great Depression, World War II and the...

An American Racer - Bobby Marshman and the Indianapolis 500 (Michael Argetsinger)

MSRP:
Now: $185.00
Was:
Michael Argetsinger’s new biography of Bobby Marshman In a fine narrative of Marshman’s meteoric rise to the top of American championship racing, author Argetsinger captures the...

MSRP:
Now: $80.00
Was:
Jimmy Murphy and the White Duesenberg Murphy’s fantastic victory in the 1921 French Grand Prix with an American-built Duesenberg. Nuvolari and the Alfa Romeo Tazio Nuvolari’s amazing...

MSRP:
Now: $45.00
Was:
The exciting story of Andretti becoming the first American to win the Grand Prix on home soil. Specifically written for children, Three To Go Mario! written and illustrated by Andy Evans is...